skip to main | skip to sidebar

Good grief, I can't believe I'm so behind AGAIN with this chronicle.....let's see.....where to begin....ugly orange shirt lady in target trying to parent my child whilst I become irate?.....no...too bitter......ummm construction workers directly behind my house for the last nine months shaking my house and making noise at all hours?.....again....too bitter.....ummm..Dellah turned 5?.....BINGO....I'll elaborate...this girl was the first fruit of my womb and has been an actual joy to have around. While she doesn't have a real 'childlike' air about her, there is a certain appeal to 3 1/2 feet tall adults, right, or TLC would be bankrupt... 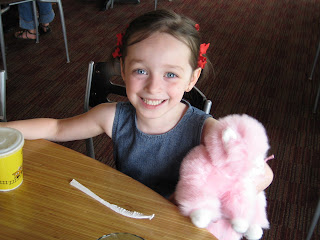 I went to this good toy store here in Sandy and got nice toys for her that I knew she would like and while we were there she became attached to this pink stuffed cat.....I told her we needed to leave it there and we could see it again another day......she said that was fine but she was going to get it for her birthday and this is how she was going to hold it while she petted it like this and this is what she was going to call it and this is how much she would love it.......when she got it for her birthday......My budget had been reached but I caved and went with her on her birthday to rescue the pink kitty from the red balloon toy store. She was called muffet and then muffin and then olivia and then custard and then ginger....i think it's still ginger. so we went to noodles and company for the usual mac and cheese and then came home so they could go swimming. Sadly I don't have a swim suit at present so I had to forgo the blissful event and watch from a chair. 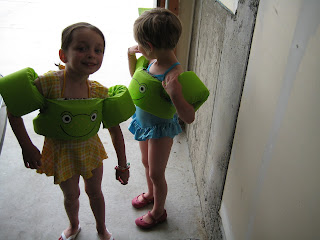 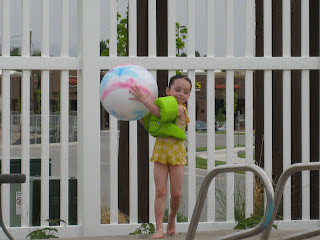 it was 50 degrees outside and the heater in the pool was broken. It was cloudy and windy and I don't know why they had so much fun but they did.......we then came back in the house for wardrobe change number 3 for the day and opened presents.....this little fountain has real water and a swan that swims around and a unicorn and flowers and a king and queen....I got her a couple of fairies with wings and wands that i thought could live there too and a storybook set that playmobil has of snow white.....with glass coffin and poison apples and magic mirror....great, mom but what did grandma give me because it's always better than what you give me...... 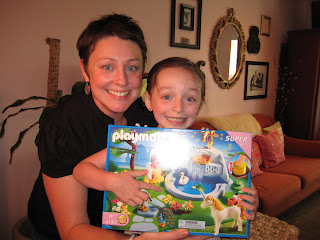 grandma gave her a wedding dress with a veil 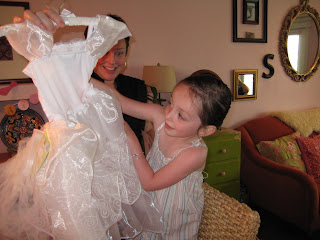 and a mermaid costume with fluffy tulle tail at the bottom.......beats european plastic toys any day... 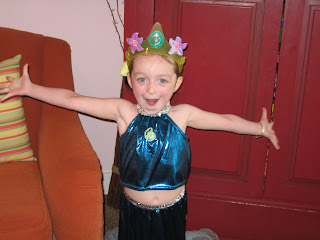 ruby got to be the bride while dellah frolicked like a fish.... 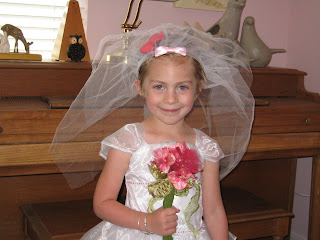 she got the special summer plasma car from target that ruby got for her birthday to make sure that absolutely no sharing would be necessary on any level since we know how impossible it is to share with your sister.... 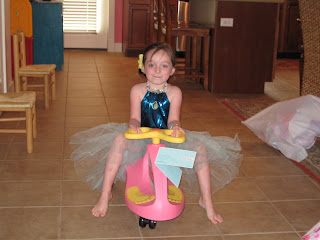 six or seven months ago dellah told me of the elaborate scene she wanted on top of her birthday cake when it was time for her birthday.....being in love with all Miyazaki movies with their androgynous boys that look more like girls than the girls do, she 'needed' to have herself and Haku from spirited away on the cake, both smiling (which if you've seen it you know is impossible because haku doesn't smile.....ever....) and holding hands......sure, dellah, ok, we'll work that out (knowing full well that when the time came she would change to some flowers and butterflies and princesses or whatever).....2 days before the day I asked her what she wanted and, sure enough, she had not deviated in the least from her original conception.....great.

so i went to the world wide web and googled pictures of chihiro and haku (if you think people are obsessed with lord of the rings and elves and whatever you should look at these folks....completely obsessed with animae and all things androgynous boy children....)

I found a pretty good one after a while and then had to start looking for pictures of dellah which i printed out and went to work.....i found one where dellah's head was the same size as chihiro's and started to cut and trace and paste because photoshop is for people smarter than me.....the finished product after hard plastic lamination looked like this... 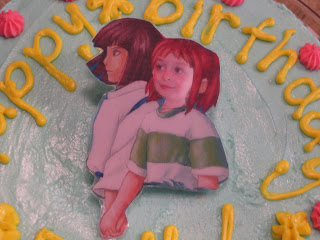 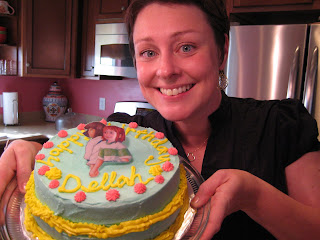 never underestimate the power of seeing your own face on a fictional character.....dellah was mesmerized and ruby was jealous that dellah was with haku and she wasn't.....good grief.

Anyway, my baby turned 5 and she knows all kinds of things and says all kinds of things and is tall and big and i can't wrap my brain around the concept that she's on that fast slope toward bigness when she won't want me to really be around.....i always ask her those desperate pathetic parent questions 'dellah will you always love me?' 'even when you're big, dellah, will you always love me so so so so so much?' 'yes, mami,' she says, 'i'll even love you when I'm 10.' i'll take it.
Posted by erin T to the S at 10:24 AM 11 comments:

erin T to the S
I live with my little chicks here in my coop. I remember something about doing whatever I wanted whenever I wanted and having lots of creative thoughts...it seems so real I know it must have happened. These are the days of my life. I'm just gonna tell it like it is, people.